ELKHART LAKE, Wis., July 13, 2020 /PRNewswire-HISPANIC PR WIRE/ — A thrilling «battle of the young guns» saw Felix Rosenqvist come from behind to claim his career Indy car victory, and extend Honda’s winning streak to four in as many races in the 2020 NTT INDYCAR SERIES. 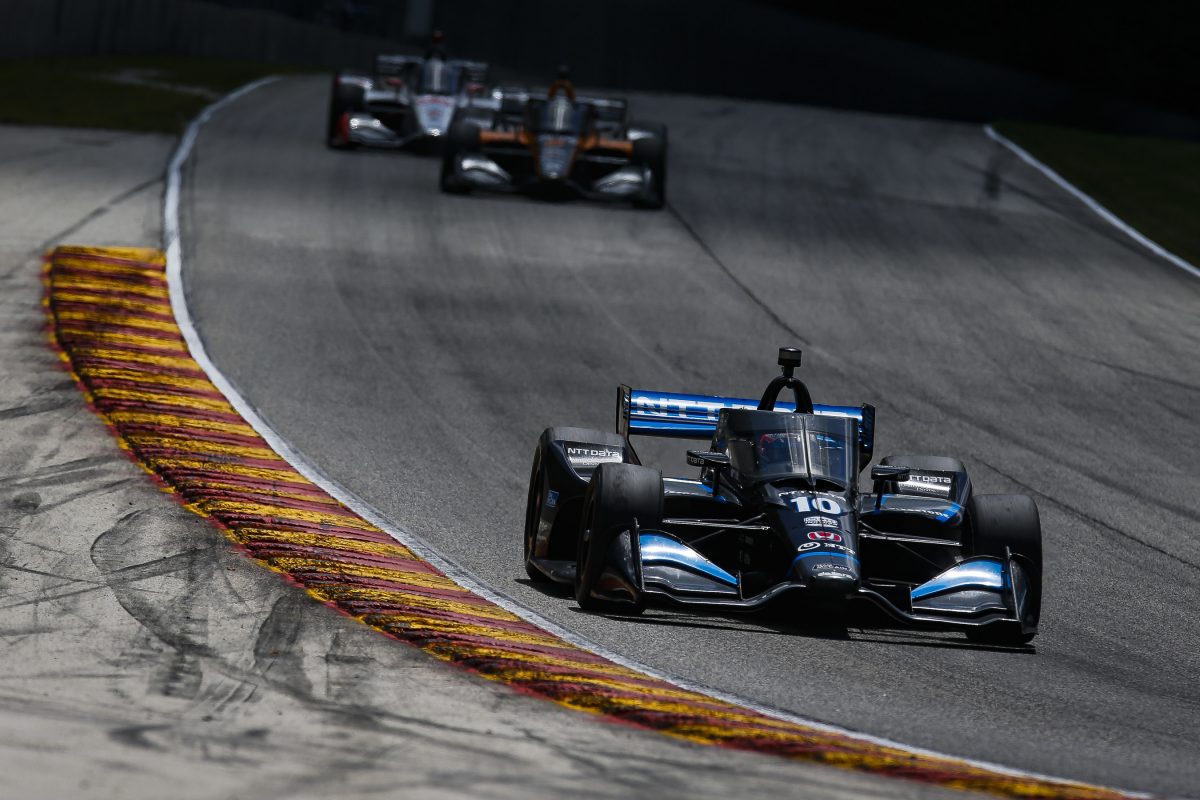 ELKHART LAKE, Wis., July 13, 2020 /PRNewswire-HISPANIC PR WIRE/ — A thrilling «battle of the young guns» saw Felix Rosenqvist come from behind to claim his career Indy car victory, and extend Honda’s winning streak to four in as many races in the 2020 NTT INDYCAR SERIES.

In the second race of a doubleheader weekend at Road America, Rosenqvist chased down fellow second-year Indy car driver Pato O’Ward in the final 15 laps of Sunday’s REV Group Grand Prix, erasing an eight-second deficit following the final round of pit stops to catch O’Ward with just over two laps remaining, pulling alongside on the run up the hill from Turn 5 to Turn 6 on the 4.0-mile road course.  The pair continued to side-by-side through Turn 6, with Rosenqvist finally establishing an advantage on the run back down the hill through Turn 7 and through the «Carousel».

Once in front, Rosenqvist extended his advantage on the final lap, taking the checkers 2.8 seconds clear of O’Ward.  The win is the fourth in as many races this season for both Honda and Chip Ganassi Racing, with teammate Scott Dixon winning the opening trio of events this year, including the opening 55-lap race here on Saturday.

Championship leader Dixon was unable to sweep the weekend, but salvaged a 12th-place result after contending with chassis balance issues throughout the race, and problems during two of his three pit stops.  Dixon remains atop the Drivers’ Championship standings with 173 points, while Herta moves into second with 119 points.

Behind the lead pair, 2019 Road America winner Alexander Rossi scored his first podium result of 2020 with a third-place finish in his Andretti Autosport Honda; while Marcus Ericsson, driving the third Chip Ganassi Racing Honda, gained 12 positions during the race to finish fourth.

After strong runs on Saturday and in qualifying for today’s race, both fourth-starting Ryan Hunter-Reay and Graham Rahal, who had qualified fifth, were eliminated in separate opening-lap clashes with Will Power.

Next
Following this weekend’s doubleheader at Road America, the NTT INDYCAR SERIES wraps up its run of five races over a 15-day period with another doubleheader next weekend, July 17-18, on the short oval at Iowa Speedway near Des Moines.

Quotes
Felix Rosenqvist (Chip Ganassi Racing Honda) Started seventh, finished first; first Indy car win, fourth consecutive win for Honda in 2020: «We’ve been close [to a win] so many times, this race was for my #10 NTT Data crew and Honda..  We’ve been strong in so many races, but it never quite came together until today.  The car was fantastic, and now we’re four for four for Ganassi and Honda, that’s huge. We had so much pace.  We kept closing in, almost half a second every lap.  We had a really good fight [with O’Ward] at the end, it was a good show and good fun. I’m really proud to be part of the NTT and Honda families.»

Alexander Rossi (Andretti Autosport Honda) Started 10th, finished third: «It’s been a difficult start to the season, but one constant has been this #27 AutoNation Andretti Autosport Honda team.  There’s never been a question of what we’re doing, or why we’re doing it.  It’s all been problem solving and keeping our foot down on the pedal and attacking as much as we can.  We knew it would come good at some point, our race pace has always been strong.  We’ll take this [third-place finish], it’s a step in the right direction and it’s what we needed to get some momentum going heading into Iowa.»

Ted Klaus (President, Honda Performance Development) on today’s fourth consecutive Honda win in the 2020 NTT INDYCAR SERIES: «What a great way to end a great weekend for everyone at Honda and HPD.  It’s so satisfying to see Felix Rosenvqist break through for his first win, and really happy to see Alex [Rossi] on the podium where he belongs.  It’s unfortunate that both Graham Rahal and Ryan Hunter-Reay were eliminated through no fault of their own, but Colton [Herta] continues to impress with his consistent results, and now is second to [Scott] Dixon in the championship.  We’re proud to power all of our partner teams: Chip Ganassi Racing, Andretti Autosport, Rahal Letterman Lanigan, Meyer Shank Racing and Dale Coyne Racing.  Now we head to Iowa, a completely different challenge to these past three road races.»